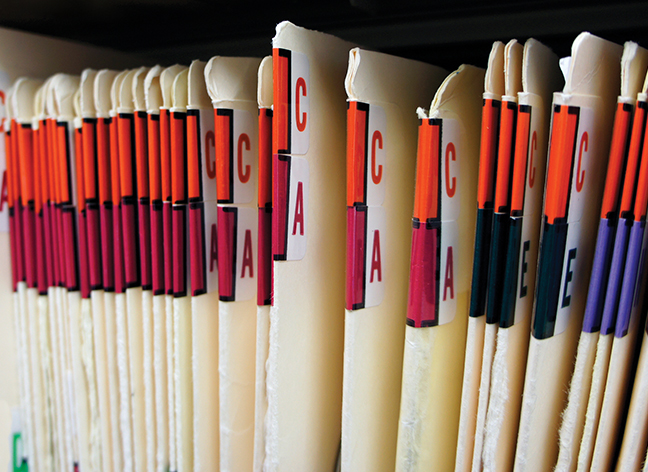 The Inflation Reduction Act (IRA) of 2022, signed into law on August 16, contains some of the most significant changes in healthcare regulation since the introduction of the Medicare Modernization Act of 2003. There are many healthcare-related policy changes contained in the IRA, which can be categorized into three major sections:

Over the coming weeks, CRA will briefly summarize some of the most important changes associated with the IRA and highlight implications for life science manufacturers. In this installment of CRA’s review of the Inflation Reduction Act (IRA) of 2022 we cover a variety of provisions influencing drug pricing, primarily via rebates paid to Medicare, and one change to how physicians are reimbursed. To review our prior installment, which covered the expansion of access for consumers, click here. We welcome any feedback or questions you might have about our analysis and look forward to discussing how your products and organization may be impacted.

There are four notable provisions that relate to pricing and reimbursement:

The most extensive change to pharmaceutical pricing in the IRA is a mandate that the Secretary of Health and Human Services (HHS) shall establish a Drug Price Negotiation Program (Program). This Program will empower Medicare to negotiate directly with manufacturers for the first time and, once price is negotiated, these drugs will appear on all Medicare formularies. As part of the Program, the HHS Secretary will publish a list of drugs for negotiation, enter into agreements to negotiate with manufacturers, negotiate “maximum fair prices”, and monitor and enforce compliance of the Program.[1]

Initially, this Program will be limited to a set number of high expenditure drugs paid for by Medicare, but a variety of criteria will determine the drugs selected:

Table 1 below identifies by year how many additional drugs are to be selected for negotiation and under which benefit.

The first list of products for negotiation will be published on September 1, 2023, with subsequent lists published on February 1 of each following year. Presumably the first year begins earlier to give more time for manufacturers and HHS to acclimate to the Program. Table 2 below provides a timeline by which negotiation or renegotiation is expected to follow.

HHS is expected to establish a consistent negotiation process which aims to achieve the lowest maximum fair price but the IRA states that HHS should consider factors such as:

HHS and the manufacturer must agree to a maximum fair price which is less than a ceiling price multiplied by a defined percentage. These amounts are defined as follows in Table 3. 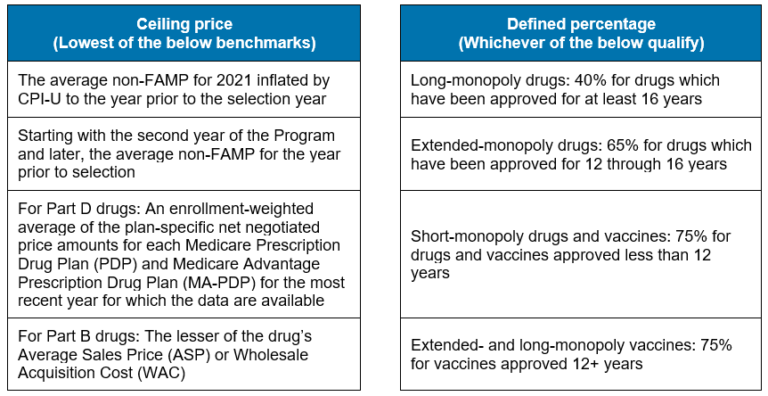 To ensure that manufacturers reach a negotiated agreement, a significant excise tax is to be applied during any period of noncompliance with the above-mentioned timelines. The excise tax is initially set at 65% of all US drug sales and increases to 95% of all US drug sales if a manufacturer remains out of compliance. Additional penalties are specified for providing false information, failing to provide the maximum fair price, and several other potential violations.

Once a product has reached a negotiated maximum fair price with HHS, this price remains in effect until the year beginning nine months after a generic or biosimilar has entered into the market. The maximum fair price will be increased annually by the CPI-U and after the first two years of the Program, the Secretary may decide to renegotiate with drug manufacturers. Renegotiations are triggered by either:

No later than 6 months after each calendar quarter, beginning January 1, 2023, HHS will provide manufacturers with a quarterly report detailing the number of units paid for during a relevant period, the excess increase in average sales price (ASP) relative to the inflation rate, and the rebate due to HHS. This provision of the IRA may begin on January 1, 2023, but HHS has the option to delay implementation for up to two years. Drugs launched after 2020 will have the rebate applied once ASP is established, which will occur on the sixth full calendar quarter after the drug is first marketed. These inflation rebates will be excluded from many forms of government price reporting (e.g., ASP, Best Price, AMP).

No later than nine months after each calendar year (defined as October 1 – September 30), beginning October 1, 2022, HHS will provide manufacturers with an annual report detailing the amount of excess annual price increase for each dose strength and form, and the rebate amount due to HHS. Like Medicare Part B, HHS may delay this first rebate period by up to two years and these rebates will be excluded from government price reporting (e.g., Best Price, AMP).

President Trump signed an executive order in 2020 directing the Secretary of HHS to remove the discount safe harbor protections in connection with the sale of pharmaceutical products adjudicated through pharmacy benefit managers (PBMs). This rule was originally intended to go into effect in January 2021; various legislative actions have delayed implementation. The IRA continues this trend by delaying any implementation of the rule until January 1, 2032.

In summary, the IRA has empowered the Federal Government to negotiate with manufacturers for high-budget products that have limited competition, implemented inflation-based rebates, further delayed the implementation of the PBM rebate safe harbor rule, and increased physician reimbursement for biosimilar drugs.

In our third installment we will cover the reforms to patient cost sharing.